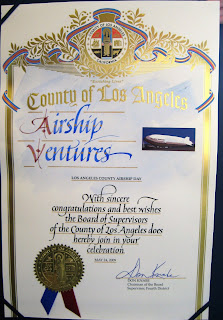 The Los Angeles County Board of Supervisors, who oversee one of the most populous regions of the U.S., issued a proclamation declaring May 24th as AIRSHIP DAY IN THE COUNTY OF LOS ANGELES. This proclamation honors the magnificent return of a Zeppelin airship to LA after a near 80-year hiatus. The last Zeppelin to have visited LA being the Graf Zeppelin, back in August of 1929 during it's "Weltfahrt" round the world trip. Supervisor Donald Knabe, whose District encompasses Long Beach and environs, made the presentation to Airship Ventures in an impromptu ceremony at the Eureka passenger terminal. 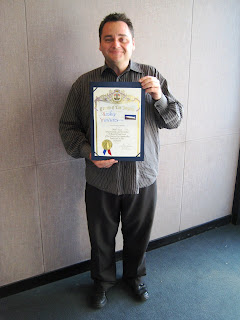 petitioned the Board of Supervisors to make the proclamation based on the airship's uniqueness, the historic significance of the LA area visit, and as an acknowledgement of Airship Ventures special accomplishments in bringing a Zeppelin to the United States, and now Los Angeles County (Knight is depicted in the photograph holding the scroll memorializing the proclamation).
Posted by Brian at 6:25 PM