Getting a bit crowded 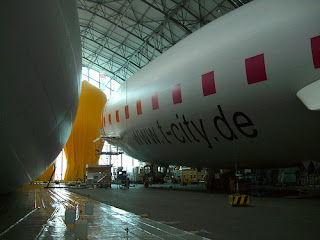 A few of our friends and supporters have been in Europe this past week and we were able, with the help of Zeppelin Luftschifftechnik, to have them take a peek at progress on NT 07 #4, under construction. As NT 07 #3 is undergoing annual maintenance, as previously reported, the hangar is already rather full with #3 and all her helium storage bags.

As you can see from this picture, the envelope for #4 is now undergoing pressure testing, and so with the entire frame for #4 also in the hangar, it's really getting a bit crowded in there!
Posted by Alex Hall at 12:46 PM No comments: 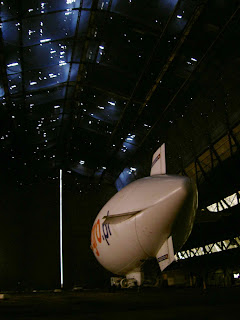 While in the UK over the New Year, Brian asked to go over to Cardington to see the airship hangars. I grew up with them, and had visited only recently, so I took a lot of persuading to drive on a very cold, miserable and wet day to go and stare at the rotting hulk of number 1 and the movie stage that is number 2. However Brian had pinged the airship mailing list and a gracious invite by Ken Nippress of Hybrid Air Vehicles (thanks Ken!) led to a visit. And it was well worth it.

Skycruise Switzerlands Skyship 600 was in hangar 1, waiting for her next adventure. There were no lights on in the hangar, but the illumination flooding through the holes in the roof, even on a gray day, was enough to see by and take a long exposure. I think you can see why the roof has netting suspended underneath! 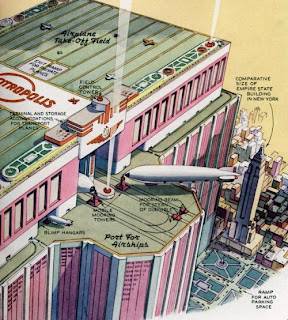 Also visiting the hangar were a British author who had written about Zeppelins in a fictional story and an architecture student. The latter had been given a project of designing an airship passenger terminal and was looking at the Cardington site for pointers. Apparently airship terminals are quite a hot topic at the moment. Modern Mechanix covered it yesterday with this very cool picture that assumes that the airships won't get caught by the wind and smash into the side of the building!
Posted by Alex Hall at 5:07 PM No comments: 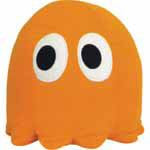 We've been spending the New Year in Europe and spent a little time checking on the progress of Zeppelin NT #4. Also in the hangar, is NT#3, undergoing her annual inspection. During this time, the helium is taken out of the hull and stored in vast storage bags that, to those of us who grew up in the 70's/early 80's, look exactly like the pacman ghosts!

Helping the illusion are the dots that are part of the T Mobile branding on #3. Munch. Munch. 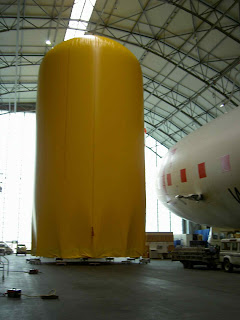