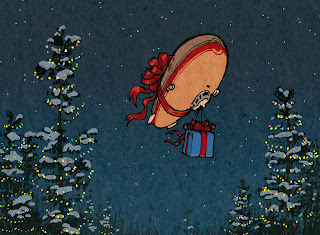 People say that things slow down around this time of year. I'm still waiting for that to happen.....

I think I'm going to create a chart that shows current workload vs blog posting frequency. With the exception of making a very serious effort while we were in Germany ( and even then, most of the posts happened while I was taking a short break afterwards!), it seems that the more there is to do, the further down the to-do list the blog slides!

We owe our regular readers more than that (do I hear a New Years Resolution coming on?), and we'll give some thought to how we can do better. I can tell you that the pace is going to pick up considerably in the New Year, so hopefully that will mean lots of new information and musings.

But in the meantime, in case you hadn't spotted it on our website, here's our festive Zeppelin and best wishes from the Airship Ventures team to airship fans everywhere.
Posted by Alex Hall at 8:41 PM 1 comment: 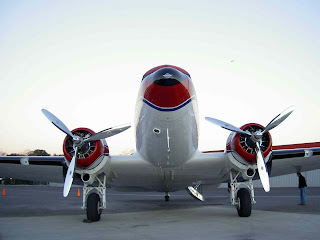 I got a phonecall late last week from Hiller Aviation Museum where I’m a board member. There was an opportunity to go for a ride in Hiller’s beautifully restored 1945 DC3 on Saturday afternoon, an hour or so cruising around the Bay. Did we want to go? Next dumb question?! 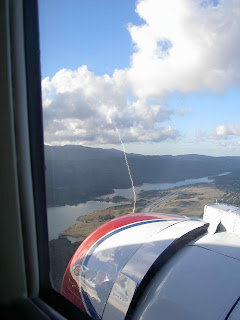 We set off in the middle of the afternoon after warming up the engines and flew out of Hayward Airport into a blue sky with broken clouds. We headed across the Bay and went over the first range of hills into the valley where freeway 280 snakes past some wonderful scenery and reservoirs. The long line of Stanford Linear Accelerator provided a cool landmark, as did the radio dishes. 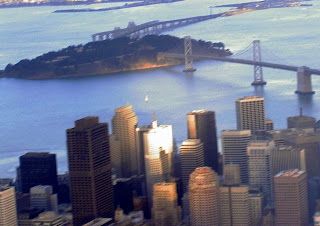 The coastline was clear of fog, providing wonderful views in the late afternoon sun. After exploring the miles of open space on the penninsula, dotted with houses the size of hotels, we came back in over Palo Alto and headed towards San Francisco, catching the sun on the skyscrapers and on the Golden Gate bridge. 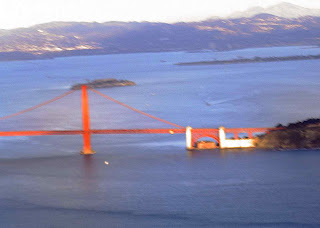 A flight over the bridge (yay!) and Alcatraz, past Berkeley and down the East Bay, watching all the traffic backed up at the Toll Plaza, headed for an evening in San Francisco, soon bought the sightseeing to a close. 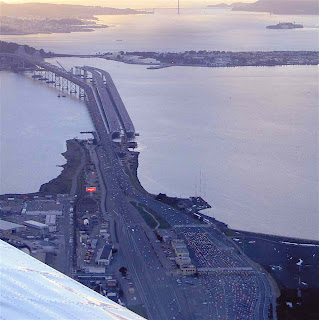 But it had been the closest views we have had yet to what the experience on the Zeppelin will be like. The altitude was about the same. We moved from small airplane window to window to find the best views - the Zeppelin has windows all around and there were times when people missed things due to the speed of flight. At about 30mph, we won't have that challenge with the airship. We can't wait!

Thank you to Steve and Barb Hiller for being such gracious hosts.
Posted by Alex Hall at 2:59 PM 1 comment: