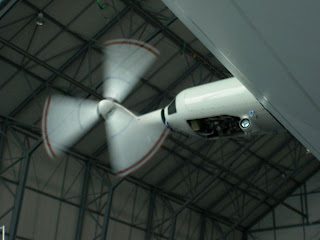 Oliver, one of Zeppelins pilots, sat in the pilot seat of #4 this morning. He was accompanied by a number of engineers crouched around the cockpit. Outside, a team of mechanics prepped and waited. They were going to fire up the engines for the first time.

A few coughs and each engine was turned over a few times to get the oil pressure up. Finally, with all the safety precautions in place, the fuel valves were opened and in turn, each engine was fired up and run for a while. Much shaking of hands and big smiles!

As I type this, the conference room is filled with a low throb as the airship is in the hangar on the other side of the wall and they are continuing to test the engines. She almost feels alive.
Posted by Alex Hall at 5:09 AM

This is great progress! I have been watching this blog for some time. Let us know when you expect the first flights over the bay area; I would like to be able to see them.