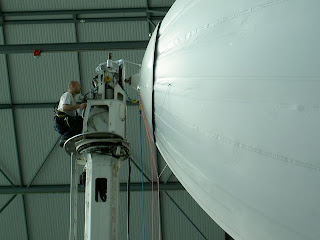 After her helium filling yesterday, the ship spent the night still suspended from the ceiling of the hangar. This morning, the mast truck arrived to take her on board so that she could be released. The engineering teams were still working on final tests when quite a crowd assembled inside the hangar to watch. Slowly the mast truck inched towards the ship until they were almost nose to mast head. Then the mast was lowered until it was in line with the nose. A ground crew man climbed the mast to check that there were no obstructions and the nose line was pulled taught by the winch line until the nose settled into the clutch in the cup.

Overhead, two maintenance technicians on a large cherry picker started the process of removing the straps securing the ship to the hangar ceiling, and she was set free to sit on her landing gear. Cool.
Posted by Alex Hall at 4:33 AM