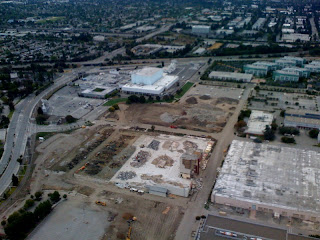 Roger Smith, a software developer I know, suggesting this stop on the tour, wrote:

Stuck in a corner of Moffett (101 & 237), it is technically an Air Force installation that is being decommissioned. It was owned by various three letter agencies in it's heyday. Reportedly there were (still are?) more nuclear weapons aimed at that site than any other place on earth. It was the US hub for spy satellite telecommunications. The dish array kinda gives that away. The biggest cube is (was ?) filled with jet turbines for power generation.

Also known as Onizuka Air Force Station, check out what wikipedia has to say.
Posted by Brian at 10:40 AM