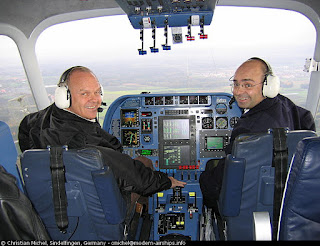 Hearing that the airship will take flight in the next day or so, the first Zeppelin to fly on US soil for over 70 years, is a wonderful thing. But as I was thinking about the pioneering journey that Kate and Fritz will soon be taking to bring the airship to San Francisco, and what a thrill that will be for them both, I remembered that one of the tiny Zeppelin pilot fraternity will not be there to wave them on (or take part as I'm sure he would have wanted to do). That is Steve Fossett.

At the beginning of the month, news stories told us that the wreckage of his plane and some probable remains had been found. All of us that had been following the story had been happy to latch onto the idea that perhaps he had simply engineered his own disappearance, for that would mean he would still be alive. But the discovery of the plane seems to draw a line under this, and I'm sure the coroner report that will come out eventually will do the same.

For those of you who don't know, Steve Fossett holds the airship speed record with the Zeppelin NT. He took it from our Director of Flight Operations, Jim Dexter (although I'm sure there were no hard feelings and I know once Jim finishes his training on the Zeppelin, he might think about it....). All the details and the source for the wonderful picture above are at this website by Christian Michel.

Steve, this transit flight is absolutely going to be happening in your memory.
Posted by Alex Hall at 2:17 PM