Err, Where are we exactly? 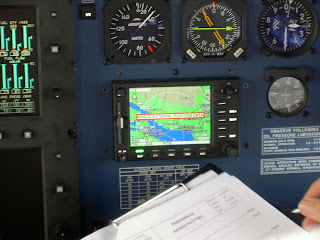 June 30 was the day that Airship Ventures did the flight performance testing of NT004. All systems from avionics to airship performance at specific altitudes, speeds etc was checked against the data sheets and the airship performed according to spec. However according to the GPS system, at the time this picture was taken, we had clearly dropped into a different universe. (it says 'Invalid External Position Data)

(they were actually doing some tests on the system at the time)
Posted by Alex Hall at 12:17 AM