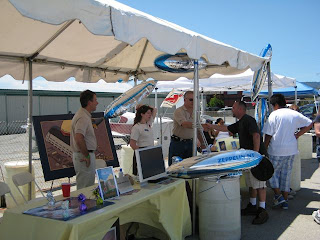 Airship Ventures had an information booth at Hiller Aviation Museum’s Vertical Challenge this year. Attended by over 5000 people, this annual helicopter show included the Red Bull Helicopter than flies upside down and many other helicopters from the emergency services, military etc. Quite a feast for the ‘rotorhead’. 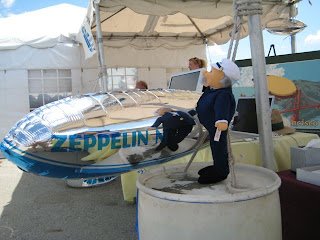 As the Zeppelin is almost vertical take off and landing, we’ll be bringing her along for a touch and go next year. In the meantime, here’s a shot of Team Airship Ventures manning (personning) the booth, plus a picture of our honorary booth babe, Graf Zeppelin.
Posted by Alex Hall at 11:00 AM