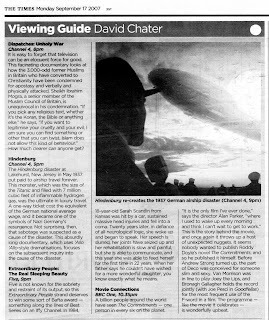 [Tongue in Cheek posting] Our eagle eyed correspondent, Peter, residing in the UK, sent me another piece from a British Newspaper, passing comment on a documentary about the Hindenburg with the statement that the disaster '..put paid to airship travel forever...". Not true of course. Peter, a known wit, followed it up with a jotting which I share for your amusement.

"There is undoubtedly a deep prejudice against (and fear of?) airships in the U.K., which underlay David Chater's relief at being able to write off airships with the expiry of the Hindenburg. Reasons?
1 They are slow (and quiet) (and, thereby, threatening).
2 They are big (and they 'loom') (and are, thereby, threatening).
3 They tend to explode (we don't understand the hydrogen/helium shift, yet).
4 They were used by the Germans in the War.
5 We don't like objects with names beginning with the letter Z.
6 We didn't invent them.
7 People can see your washing {laundry} in your back gardens, from them.*
8 We have weather. (Foreigners don't.) Airships can't work in our kind of weather.
9 We distrust all politicians (politicians...hot air...balloons...airships).
10 They are fun. We don't do fun. (Except when we go on holiday).

*British people mostly hang laundry outside to dry, except when it rains and then they will use racks inside the house, or possibly even a 'tumble drier'. Nosy people enjoy passing comment on the cleanliness and content of other peoples washing lines. In the USA there are places where you are not allowed to hang out your washing to dry - I used to live in such a place. Discriminates against my British culture I'd say...
Posted by Alex Hall at 11:04 AM