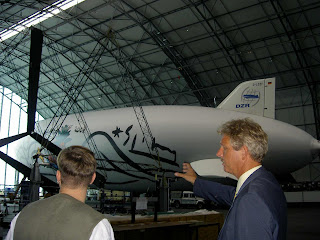 As you know, Airship Ventures has optioned Zeppelin NT07 serial number 4. It was very cool to see her being assembled in the hangar. As the structure is black carbon fiber, the hangar is very large and also full of structural members, it was very hard to get a reasonable picture of the progress. But just about all the hull structural members are up, along with the engine beam, fin and rudder supports etc. 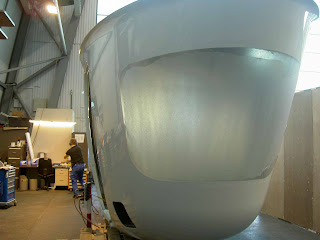 In addition, the carbon fiber gondola is also taking shape, with the cockpit being installed. 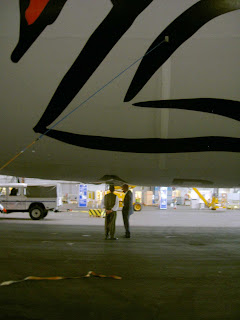 It's difficult to get a feel for the scale of the airship until you get close to one. Here's Brian with Robert, the Chief Engineer at Zeppelin, under number 3.
Posted by Alex Hall at 9:38 AM