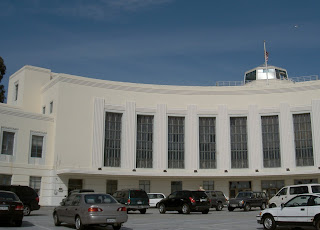 It's family movie night, and we decide to watch Indiana Jones and the Last Crusade. And of course, because we're seeing airships just about everywhere...there's an airship in the movie.

Indiana comments to his dad as they move through the airport 'I got the first flight out of Berlin to the USA'. At the time, the late 1930's, the direct flights were by Zeppelin, either the Graf Zeppelin or the Hindenberg. So we watch with more attentiveness than usual as they go through the line (no TSA security here) and board the 'D-138' Zeppelin, which appears to be a model.

At this point, we look at each other in disbelief. Is that a bi-plane underneath the Zeppelin? Like the USA was doing with the USS Macon? But the Germans didn't do that.....

Actually they did. the Germans investigated adding a trapeze to the Hindenburg before its final fateful flight in order to hold a mail carrier plane, so perhaps the movie creators were using that in order to advance their story and enable Indiana to engage in the aerial battle. Or perhaps it was a lucky plot line that had some basis in reality. According to this source, in the deleted scenes more than one plane was hanging from the Zeppelin.

Then again, the airport Indiana and his father flew from wasn't in Berlin either, but was rather, Treasure Island in the Bay Area. We took the picture that accompanies this posting the other day. Incidentally, Treasure Island was once a base for Navy Blimps, becoming famous as a result of the so-called 'ghost blimp'. So there are more airship ties here than would initially be apparent.

We like most the scene in the movie where Indy dispatches the German commander through one of the hull promendade deck windows prior to take off with the comment 'No Ticket'.

We promise we won't copy this idea.
Posted by Alex Hall at 8:37 PM