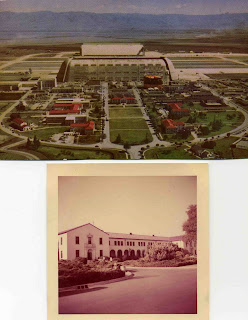 Brad Meinhardt sends us these family photos of Moffett Field from the 1950s...

I thought you might find the attached photo of interest. Before I was born, my father and his pal forced the Navy to take them on active duty, October 8, 1954 by volunteering for the Army draft while in the Navy Reserve. They wanted the Korean War G.I. bill for college. The process was very quick and the Korean War was winding down. So they sent them both to Treasure Island for 6 weeks and then on to their assignments My dad ended up at Naval Air Station Moffett Field.

The photo shows what the base looked like back then and the photo below the schematic is his barracks. He described Moffett as quite an incredibly beautiful "campus" at the time.

He worked in one of the concrete blimp size hangars across the field, making modifications in electronics gear with Westinghouse reps.

Our own corporate headquarters are in Building 20, the former BOQ (Batchelor Officers' Quarters), and indeed the NASA Ames Research Park is today a beautiful campus, rich in history, where numerous companies are actively working towards the future.
Posted by Brian at 9:32 AM