The whale researchers at NOAA were able to solve a UFO sighting reported on The Vike Factor, a Canadian UFO blog. It was of course, Eureka, busy with the whales, but I guess from a distance, hovering below a gray and gloomy sky, she exhibited many characteristics of UFO's. For example, she was 'cigar shaped', and 'moving too slowly to be a plane'. The observers decided that it might be about the size of a normal jet (747 I guess) and they would be right. As the airship rotated and hovered then it 'shrunk and vanished and then reappeared again'. The whole post is an interesting read. 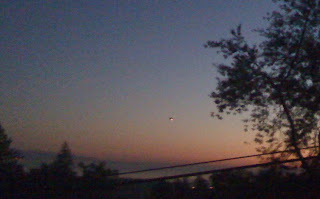 This is not the first time Eureka has been tagged as otherworldly. We received a call about a year ago from someone who was investigating a sighting over the Monterey Bay. The airship was traveling back from Monterey at dusk and seen head on, she really did look like an upside down UFO with her fins helping to create the saucer effect and including a cabin with lights shining out of the windows!
Posted by Alex Hall at 12:39 PM