"Flugvergnügen" or "The Ultimate Flying Machine" 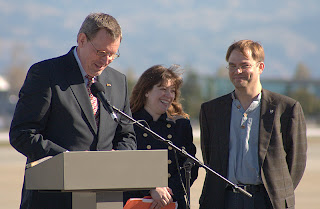 Many people drive German cars that create „Fahrvergnügen“ or that call themselves „the ultimate driving machines“. Consul General Schütte said he was sure that the product made by „Zeppelin Luftschifftechnik GmbH & Co. KG“ in Friedrichshafen/Germany will create „Flugvergnügen“ in „the ultimate flying machine“ for all those who are lucky enough to get a ticket for one of the airship’s Bay Area trips.

Wouldn't it be great if he's related to Johann Schutte.

What thought has been given to the financial and logistical issues that would attend the creation of much larger Zeppelins (capacious as the old Hindenburg, for example), intended for continuous service up and down California? I ask because it strikes me that a large fleet of Zeppelins, continuously running throughout the State, almost convoy-style along some routes, would have as much carrying capacity as, and be far more cost-effective and more affordable to passengers than, the High Speed Rail that was just endorsed by voters who approved Proposition 1A.

From everything I can gather about the proposed HSR trains, it would take 18 or 19 of the old Hindenburg class Zeppelins to equal the carrying capacity of one HSR train. From material I found about the Hindenburg, I estimate that a modern airship of that magnitude might cost on the order of $40M in 2008 dollars. Does that sound right to you? If so, a HSR-train substitute would cost around $800M, and TEN HSR-train equivalents (i.e., a fleet of 200 airships, each carrying between 50-70 passengers) would cost only $8B, with no need to construct or maintain expensive rail infrastructure or stations: Necessary mooring/terminal facilities may already exist at some airports, or perhaps could be more cost-effectively provided there.

Although the airships wouldn't travel as quickly as HSR, they also would have more of a straight-shot travel path, and might be able to make up a significant amount of time that way. For sure, Zeppelins could be in the air and serving passengers years before the first HSR trains could ever roll.

The estimated bill for a full HSR system is publicized as $45B, but who really believes that? I think we're looking at at least $100B when all is said and done. Yet the way I see it, for a fraction of the ORIGINAL estimate, airships could be carrying as many people as the HSR, years sooner.

Now let's assume that each airship in this hypothetical system charged the HSR's projected fare of $55 per one-way trip, and could make two such trips (or one round-trip) every day. With a ridership of 70, that would mean fare revenues of $7700 per day, or $2,810,500 per year. In 20 years, a single airship would generate $56.21M in revenue. Call it $50M to account for maintenance downtime and other unforeseen costs. Would that be enough for the service to be financially self-sustaining? If not, then to boost the 20-year income per airship by $20.5M, simply raise the one-way fare to $75.

Obviously, the figures I am playing around here are among the roughest of the rough. But they are encouraging enough to make me think that an airship service could be economically self-sustaining, and more quickly and less-expensively established than the HSR, which I suspect will require some kind of subsidy based on taxes or bonds for a long time after it begins operations -- at least if it tries to keep the $55/trip promise.

I understand that the experience that Airship Ventures offers is qualitatively different and better than the merely comfortable, affordable, and perhaps refreshing and inspring long-distance transportation that I am thinking about, so I imagine that you could continue to command premium fare rates for your tourism excursions, even if an airship-based sky commuter service ever took flight. On the other hand, you might be the operator, or one of the operators, of such flights, and so be able to offer both "economy" and "premium" trips.

If you think that affordable airship travel between our major cities is financially viable, in a way that doesn't choke off demand for premium flights, then I urge you to find a way to get it going sooner, rather than later. Perhaps if started soon enough, such a service would demonstrate the lack of need for an expensive and environmentally disruptive HSR system that would be funded by tax dollars and bond indebtedness. How wonderful it would be if a "serious transportation" airship service could also be a profitable, self-sustaining private sector business.

In any event, good luck with your new company. I hope to see one of your airships pass over my area soon, and to take a ride in one of them myself, someday.

I was there and misheard him to say "fahrvegflegan" [okay, my German is horrible]. "Fun to fly" - whoops ... think both can work - the ultimate flying machine that's fun to fly. :-)