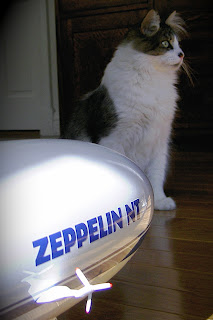 Given how many blogs have already covered this fun story, I was reluctant to do so myself, particularly as, unlike some blogs, I wish to respect the ownership of the Smithsonian in the wonderful image that has been accompanying the story and hence that makes it less attractive for you to read.

What am I going on about? Well, in 1910, the airship ‘America’ attempted a transatlantic crossing. Their engineer, also a famous aerial photographer, Melvin Vaniman, decided that they would take along a kitten named Kiddo. Kiddo survived to meow the tale, even if the airship did not.

The web page with more info that has permission to publish the picture can be found here. I’m also linking to this blog that has a good picture of the America, although I don’t think its permitted. And here’s a book I found that has the Kiddo picture in it, along with lots of other wonderful trivia about animals in the air. It's called 'Animals Aloft' and is based on the Smithsonian collection.

Which leads me to comment on the main picture with this blog entry, one of our candidates for ‘ships cat. "Sir Elliot Awesome Earhair" (blame the SPCA for that name) would certainly not be the lightest cat ever to fly but he was the first of our tribe to show some moderate interest in the Zeppelin. You never know…

Thanks to Mike Farr for the original article.
Posted by Alex Hall at 6:18 PM