Airships in the Blogosphere 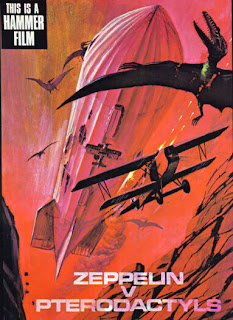 I like to be original about my posts, but sometimes you come across one from another blogger than you just HAVE to share. Such is this post from Airminded, a blog about mostly British air related stuff pre 1941. Apparently Hammer Films in the UK nearly made a film called Zeppelin vs Pterodactyls, a sort of 'Land that time forgot' meets 'world war one' flick. They only ever mocked up a poster for investors, but its tantalizing to think how amazing it would have been. I can just see all those rubber dinos against the painted backgrounds....

Hammer Films has just been reincarnated. Perhaps we should start a petition for this movie to be made!
Posted by Alex Hall at 2:15 PM