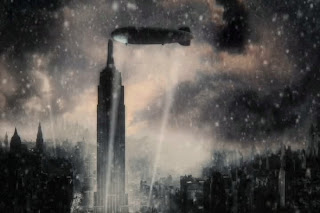 It's been a busy couple of weeks - it will be fun when we're telling you about our actual day to day stuff instead of teasing you with airship miscellany.....all in good time. I'm sure I'll look back at back at this phase of the dream turning into reality with quite a bit of nostalgia in the years to come.

Which gives me a nice segue into talking about the wonderful inventions and ideas that were postulated BH (Before Hindenburg, the time when airships really fell out of favor). Take this piece from 1932 in Modern Mechanics and Inventions which tells a fascinating tale of the 'traffic dictator', the 'traffic god', that would be sitting in an airship above a football stadium after the game controlling all of the traffic lights to ease the crush of, oooh, 50,000 cars!

The blog that my friend Jim pointed me at for this inspiring invention also has some other airship related pieces on it which remind me of that superlative past/future movie, 'Sky Captain and the World of Tommorrow' with its massive aircraft carrying airship. Not so far removed from many of the heavy lifting airship ideas being worked on today!
Posted by Alex Hall at 2:27 PM