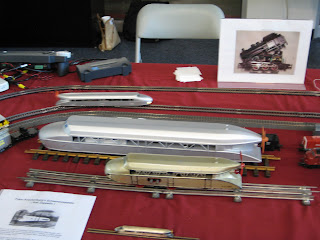 The European Train Enthusiasts had their EuroWest 2008 show at Hiller Aviation this weekend. This is a club that caters to Märklin, Roco, Trix, Fleischmann, and other european model train brands. Inside there were several modular layouts in HO and Meter Gauge, and outside the Bay Area Garden Railway Society had a G/1 Gauge modular layout.

The Rail Zeppelin ("Schienenzeppelin" in German) was designed in the late 1920s, and ran for a few years in the early 1930s. It was a specially developed high-speed train borrowing from aviation design, and propelled by a rear mounted propeller. It was able to reach speeds of up to 230 km/h -- a record for gasoline powered rail vehicles which stands to this day. Only one was ever built.
Posted by Brian at 9:07 PM