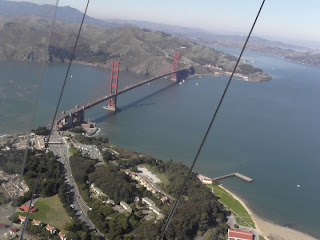 Extreme airship fans probably know about Keith's blog, 'Blimpin' ain't easy', on being a new airship pilot for Snoopy 2, one of the MetLife blimps. It's an interesting peek into the life of a traveling airship. I spotted that in a recent trip to the Bay Area, Keith had taken a lot of photos of the scenery and I think it gives some idea of what we're likely to see with the Zeppelin.

Snoopy 2 is a small and nimble blimp. The gondola is secured to the pressurized envelope by means of lots of wires, and it also has ropes for the ground crew to grab when it lands. So you have to be clever with where you point the camera not to have ropes and wires in your money shot!
Posted by Alex Hall at 2:05 PM